Ashley and Lauren spent their a month Arusha, Tanzania with other members of the University of Missouri elementary education program. Both were selected from a number of applicants for this prestigious program in eastern Africa that allowed them to put their teaching skills to use. Lauren taught math and science to 3rd, 4th, and 5th grade students in the city's Catholic elementary school. Ashley taught English, math, science, and spelling to her students at Prime Primary school, the local Muslim school. Although they taught at separate schools, Lauren, Ashley, and all of the other participants stayed in the same hotel and spent their weekends together on a safari, hiking, and learned about the local Masai tribal culture. Both ladies valued their experience, as they both learned a great deal that they will be able to use in their student teaching programs this fall. Lauren documented her trip at laurcrutch.tumblr.com.


Calahan Strickland spent 22 days in South Africa studying wildlife management at the University of Pretoria. Her studies in this subject included, soil and geology, plant management, animal care, and conservation of endangered species. Because this program revolved greatly around the outdoors, Calahan and other students spent most nights camping near Kruger National Park, which is one of the largest game reserves in Africa. Though she spent a lot of time studying at nature reserves and rehabilitation centers, Calahan and her fellow students made time for some fun. She was able to take an elephant back safari, other safaris on foot and by truck, mock animal darting from a helicopter, and interacting with African animals, including lion cubs. Her trip proved to be an unforgettable experience. 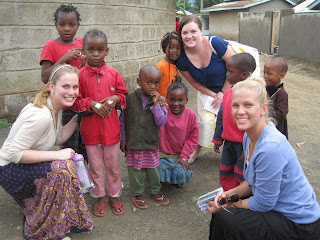 Lauren Crutchfield (lower right) poses with some fellow teachers and her students on her first day of teaching at the school. 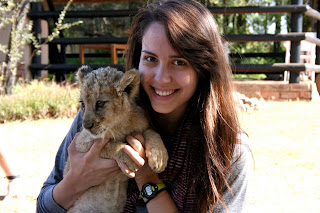 Calahan Strickland is seen here with a furry friend, a lion cub, during one of her African adventures. 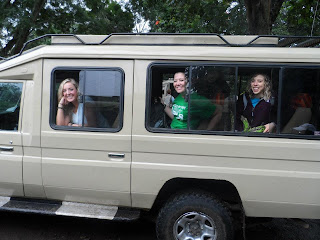 Ashley Archer (far left) poses for a picture with other Mizzou teaching students before heading out on their African safari.

Posted by Caryn Lippincott at 7:51 PM No comments:

Welcome to the Mizzou Delta Gamma blog! Mu chapter's goal is to keep collegians, alumnae, parents, and the rest of the Mizzou community up-to-date on our chapter happenings. We hope you enjoy what you read and see, and want to thank you for stopping by!

Who loves DG at Mu?